How do Casio projectors stand up against the rest? We’ve broken down the key features of our projectors to see how they fare with the competition.

Conventional projectors use lamps which, although may perform well initially, grow dim over time and eventually need replacing. Replacement lamps, which typically last 2,000 hours, cost around £100. Regular usage of a single projector unit might result in changing a lamp every 2 to 3 months, with costs stacking up quickly.

In contrast, Casio is the only manufacturer to have a projector range entirely free of conventional lamps. This is thanks to Casio’s revolutionary laser and LED light source which produces the same level of brightness but crucially, doesn’t degrade over time meaning the brightness output is the same on hour 20,000 as it was when it was first switched on.

Casio’s laser and LED light source lasts 10 times longer, saving the user the incurred cost of nine additional lamps, a total cost of £900 or more. In addition to the financial cost, conventional lamps often contain toxic mercury, posing a risk to the environment. Casio’s laser and LED hybrid light source is completely free of mercury, making it far easier to manage and far safer to use.

Just like traditional light bulbs, projector lamps produce a lot of excess heat which draw unnecessary amounts of power. Take the Casio XJ-V100W for example, which requires 150 watts. A conventional projector of the same brightness typically needs 270 watts, a difference which could charge 24 smartphones!

The laser and LED hybrid light source is designed specifically with efficiency in mind, producing substantially less excess heat and therefore requiring less power. When rolling out a fleet of projectors across a school or university and eco-credentials are a growing concern, power consumption of your AV is a key consideration.

We’re all familiar with the ghostly emergence of a projector logo on screen after switching it on. Conventional projectors need around 70 seconds from switch on until full brightness is reached. Especially in schools, the first part of the lesson is a crucial time for students to engage, and a 70 second delay for the class to get started is enough time for pupils to lose interest and switch off.

The entire Casio range has a startup time of just five seconds from switch on to full brightness. This saves valuable lesson time, and prevents delays, meaning your display is ready when you are. Scale this up across the school year and you’re looking at saving almost seven hours of lesson time if used twice a day.

Replacing lamps is a hassle, especially when the projector is mounted from the ceiling in a sports hall or lecture theatre. The short lifespan and unreliability of lamps means regular maintenance, which can interfere with day-to-day usability. Additionally, the fans necessary to cool down hot lamps require filters which eventually need cleaning or replacing, yet another job for the AV technician!

Casio’s entire range is built with longevity in mind. Each component lasts the lifetime of the projector itself thanks to the dust resistant design and cool operating temperatures. Casio’s innovative engineering, supported by a market-leading warranty lets users simply fit and forget, safe in the knowledge that the projector will produce an outstanding image without additional servicing. 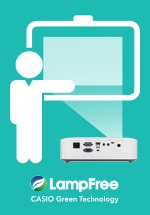